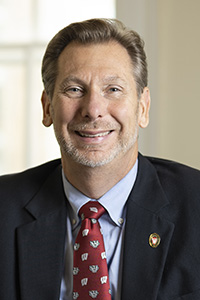 Charles Hoslet serves as Vice Chancellor for University Relations at the University of Wisconsin–Madison. He is responsible for leading university efforts related to communications, marketing and brand strategy as well as interactions with key stakeholders including federal, state, local and tribal government leaders, community organizations, business and industry, and visitors to campus. Hoslet currently serves on the Board of Directors for Destination Madison and the Wisconsin Alumni Association’s Alumni Advisory Council, and has served previously on Advisory Boards for University Research Park and the Wisconsin Technology Council among other organizations.

From 2013 – 2016, Hoslet served as Associate Vice Chancellor for Government and Corporate Affairs, overseeing the development of the university’s federal relations presence in Washington, D.C., the creation of the South Madison Partnership Office, and Chancellor Blank’s outreach trips around the state, among other initiatives.

From 2003–13 Hoslet founded and served as Managing Director of the UW–Madison Office of Corporate Relations, which is responsible for promoting company growth and economic development by facilitating relationships between companies, organizations and entrepreneurs and university faculty, staff and units in areas such as student recruitment, research expertise and technology transfer.

From 1997–2003 Hoslet was responsible for directing all state governmental relations efforts for the university, including representing the university before the governor’s office, state legislature and other state agencies. Prior to his appointment at the UW–Madison Hoslet served as the Executive Assistant at the Wisconsin Department of Veterans Affairs, and began his career in state government in the Office of the Governor, including serving as both Deputy Legal Counsel and Chief Legal Counsel to the Governor of Wisconsin.